Evgenii Butenko “Bubbles on the knees of sweat pants”

A brief biography of the founder of dwarfism in modern art Pavel Fedorovich Avdotyev.

The legendary Grandfather Phonograph, in the world Pavel Fedorovich Avdotyev, was born simultaneously in 1856 and in 1917, through the microbiological connection of the placenta of two women – Maria Ipatievna Berezhnaya (years 1815-1857) and Nina Semenovna Oglobina (years 1895 – 1950). The German naturalist and philosopher Ernst Heinrich Heckel (author of the terms “Pithecanthropus”, “phylogenesis”, “ontogenesis” and “ecology”) first discovered the first half of Pavel Fyodorovich in the course of his research on the Madeira Island, in a smear taken at the port woman, Maria Ipatievna Berezhnaya, an emigrant from Russia, who was by then 8th month of pregnancy. Since the starting point for Haeckel’s views was the sequence of embryonic development, which he called “gastrula”, he decided that the stage in the form of Pavel Fedorovich repeats the common progenitor of all animals. Having conserved Pavel Fedorovich in a nutrient fluid in a specially made glass flask, Haeckel put a piece of paper on it with the inscription “Gastrula” and deposited it at the German Academy of Naturalists “Leopoldina”, for which he received the Cotenius Medal in 1864.

Pavel Fedorovich for many years was very bored in the flask and took offense at Haeckel, in retaliation for him becoming a supporter of Lamarckism, for he shared the point of view of Jean Battiste Lamarck, that while improving, the organisms had to adapt to the external environment. However, over time, it became clear that Pavel Fedorovich improved liked much more than adapting, so in 1917, with the help of an acute bone matrix independently grown on his abdomen, he escapes from a flask and from the German Academy.

It was not easy for Pavel Fyodorovich, at that time, to a creature with an underdeveloped body swollen and soft from the nutrient fluid, to crawl at night, so as not to be crushed by the strongest, from the point of view of brute force, and very short-sighted in the field of knowing the wonders of nature and secrets of the universe . The purpose of his journey was Russia, which he understood as a biological homeland, thanks to a smear from the depths of the port woman Maria Ipatievna Berezhnaya. Having caught the bone matrix at the bottom of the railway car, Pavel Fyodorovich in the same 1917 gets to St. Petersburg.

Here he manages to attract the attention of the head of the Department of Plant Physiology and Anatomy of St. Petersburg University Sergey Pavlovich Kostychev, walking along the 10th line of Vasilyevsky Island. Sergei Pavlovich studied a notebook with a picture of a rare uterus mutation observed in Nina Semyonovna Oglobina, a student of the Higher (Bestuzhev) female courses, and in a strange way resembling plant chlorosis, when he noticed the terrified tired Pavel Fedorovich lying on the sidewalk and inexplicably resembling a drawing in tetrad.

During the acquaintance, it turned out that Pavel Fyodorovich and Nina Semyonovna’s mutation are phenomena of a rarest species from the animal and plant world. It was decided to unite them, as it exists in nature, which Sergey Pavlovich Kostychev did in his laboratory, cutting out the Nina Semenovna mutation, and thus combining the animal and plant world in one organism – Pavel Fedorovich Avdotyev.

Pavel Fedorovich was not an intermediate link between interaction and merging, and not a form of relationship in which both partners or only one benefit from the other, but a full-fledged organism, animal and plant in one person, possessing consciousness and able to communicate with a person. However, life in Russia of the twentieth century quickly showed Pavel Fedorovich to what disastrous results a simple desire to communicate with people can lead.

This led to the fact that the views of most people of his biological homeland Pavel Fyodorovich began to consider the products of vital activity of pathogenic microbes, which is why he was forced to explore their relationship with the human body in the conditions of the natural and social environment of Russia.

Subsequently, under the influence of sad conclusions and severe Pavel Fedorovich became fascinated by the works of Plato, Herodotus, Diodorus of Sicily, Posidonius, Strabo, Proclus and completely withdrew from microbiology and began to search in his mind, in the form of archetypes, unknown and mythical continents – Pacific and Lemuria. Having discovered them, and having described in detail in several works their geography, population, flora and fauna, Pavel Fyodorovich quite rightly began to consider the inhabitants of these continents to be their best and only friends.

In particular, pacifidians and Lemurians helped him to describe the rare type of dung volcanoes (subspecies of mud volcanoes), which they used as a means of communication by the type of pneumatic mail. Messages in durable, streamlined form, tubes traveled through the underground channels of each continent separately, exchanging important information, and also connecting Pacifida and Lemuria with each other.

Pavel Fedorovich began to think about whether there were such dung volcanic pipes that could connect the world of the archetypes of human consciousness and the world in which people live under the influence of the waste products of pathogenic microbes, which for some reason are called “real “.

Valuable information from the world of Pacifida and Lemuria, in the opinion of the first creature who united the kingdoms of animals, plants and people, could have a beneficial effect on, if not all, then at least some representatives of the Earth’s biosphere. Pavel Fedorovich sent several valuable capsules through specially equipped salsa, makluba and dung hills of Pacifida and Lemuria.

In one of them was a sound roller with the music of two continents, recorded with the help of a bone matrix grown on his abdomen at the time of imprisonment in a flask in the German Academy of Leopoldina (for which he received from his friends the good nickname Grandfather Phonograph) . In the other two – his works on the description of the newly discovered lands.

And in the last capsule – a few samples of works of art, from among the popular in Patsifid and Lemuria directions dwarfism. This is a type of dwarf pictures obtained from junk DNA, (or as they are called non-coding DNA), and grown in a hypobaric chamber. Since the paintings themselves grow and they don’t have an author, the Grandfather Phonograph, in his message, offers authorship to anyone who receives a capsule. Once in the summer, raking manure during the times of his work as a cattleman, on a farm in the village of Svatkovo, Leningrad Region, artist Yevgeny Vyacheslavovich Butenko stumbled into a huge pile of manure intended for export to the field, on a strange black oval object, which opened with an iron scraper , he discovered several examples of pictures of the direction of dwarfism and the life story of the Grandfather Phonograph. Deciding that it would still be correct to divide the authorship of the pictures grown in the hypobaric chamber from noncoding DNA, between Pavel Fedor vich Avdotevym and himself, he finally presents their esteemed public.

Biography: Eugene was born in 1979 in Chisinau. He studied at the Faculty of Philology of the Slavic University. Worked as a graphic artist. He wrote poetry, prose, studied experimental music. He worked as a courier, security guard, guide-translator, loader, handyman at the factory. In 2008 he moved to St. Petersburg. In 2010, he moved with his family to the village of Osmino, St. Petersburg region, where he worked as a cattleman on a farm (he cleaned manure for cows). Here, in 2012, he again began to draw, write texts and record music as part of his musical project “Borshevik Sosnowski”. 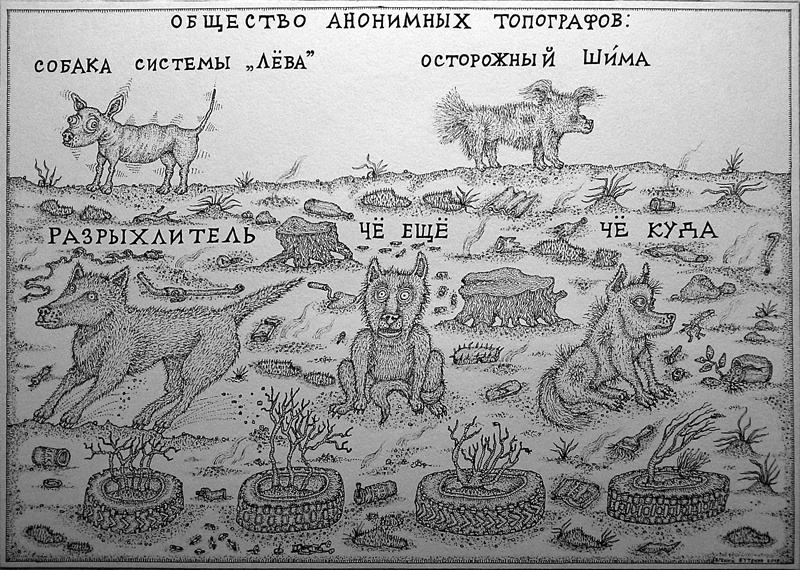 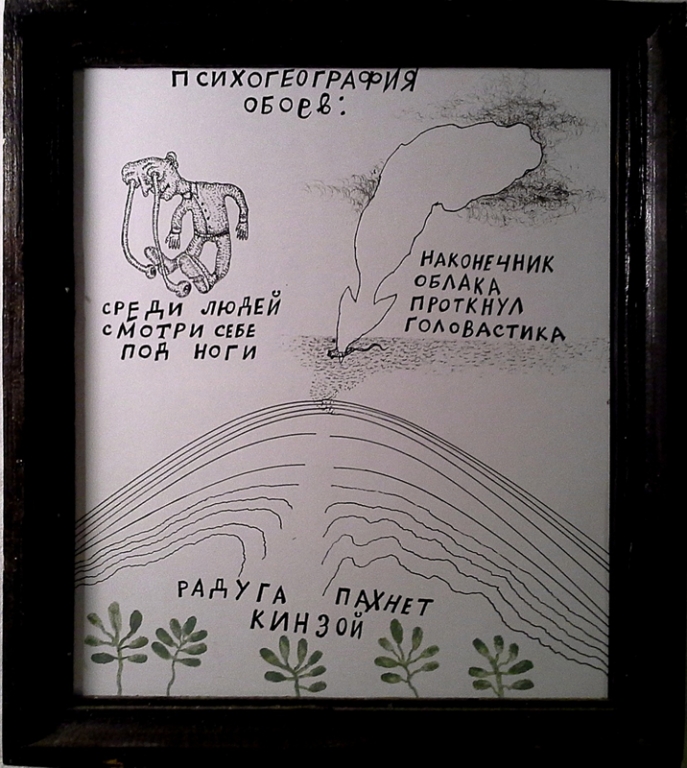 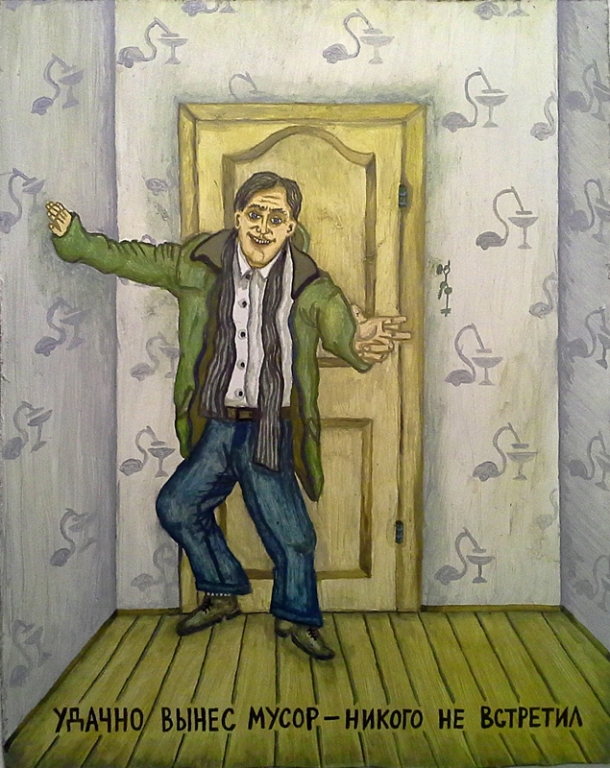 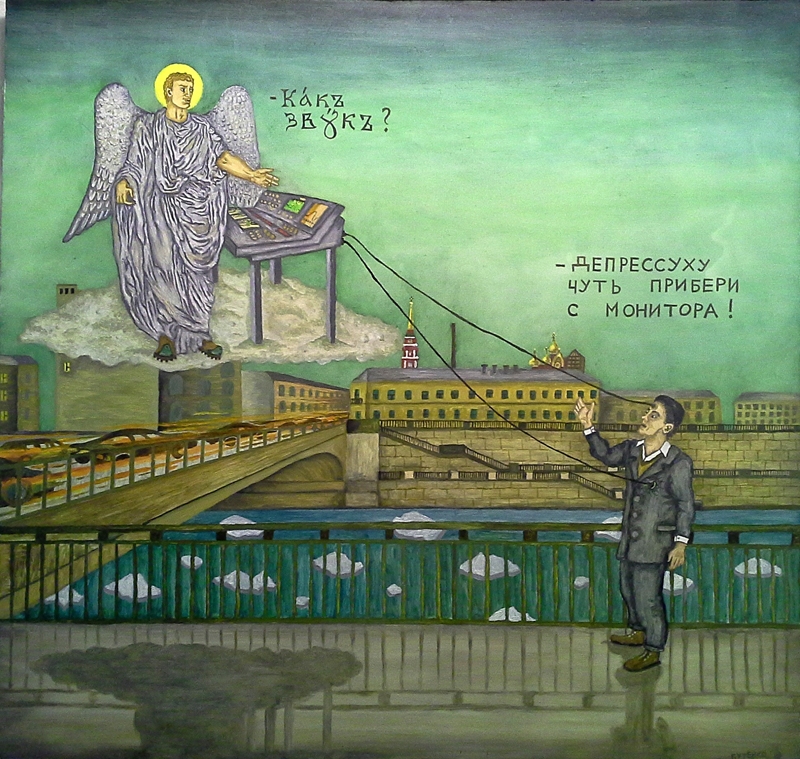 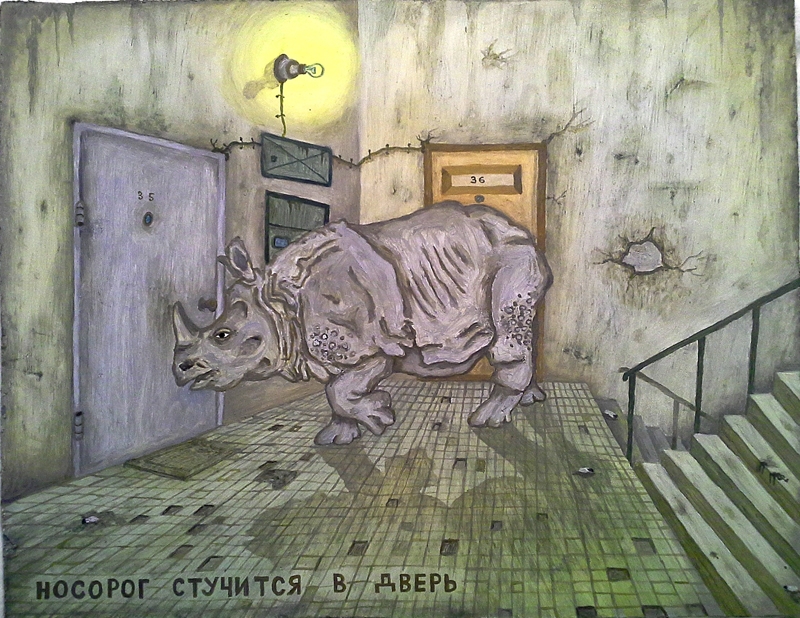 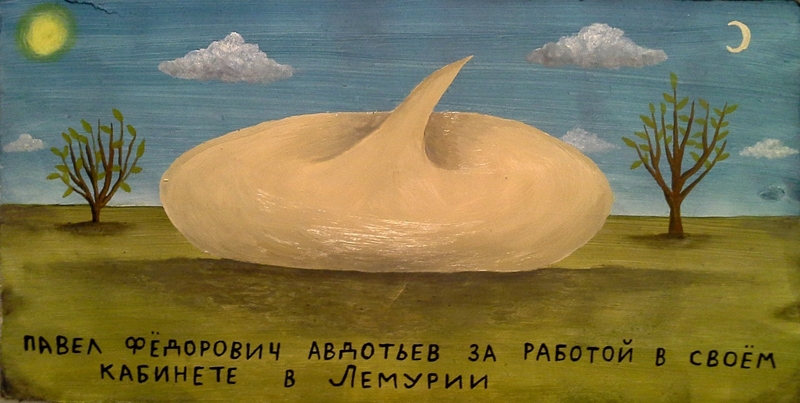 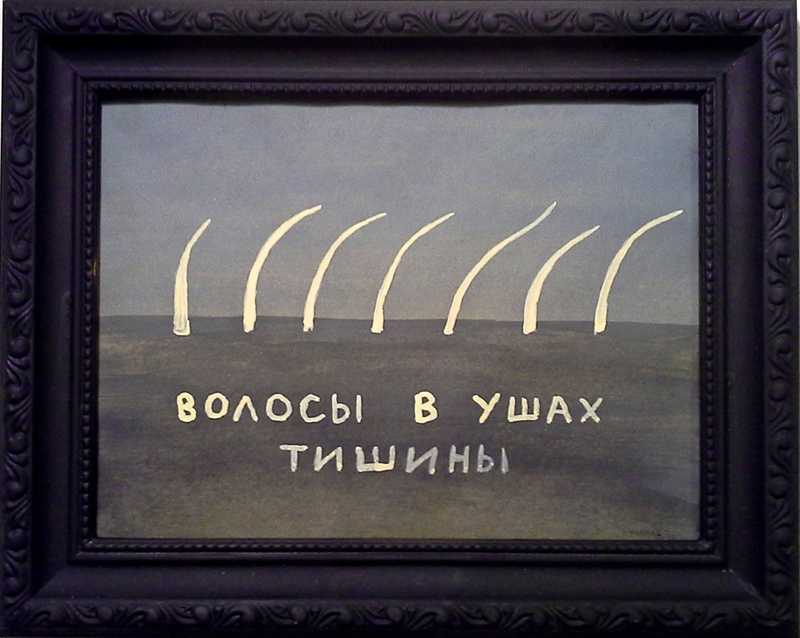 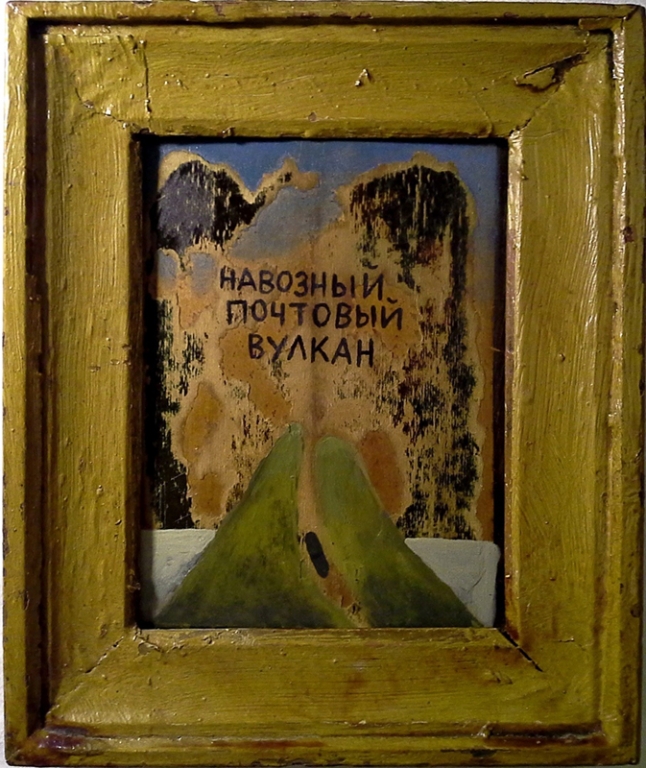 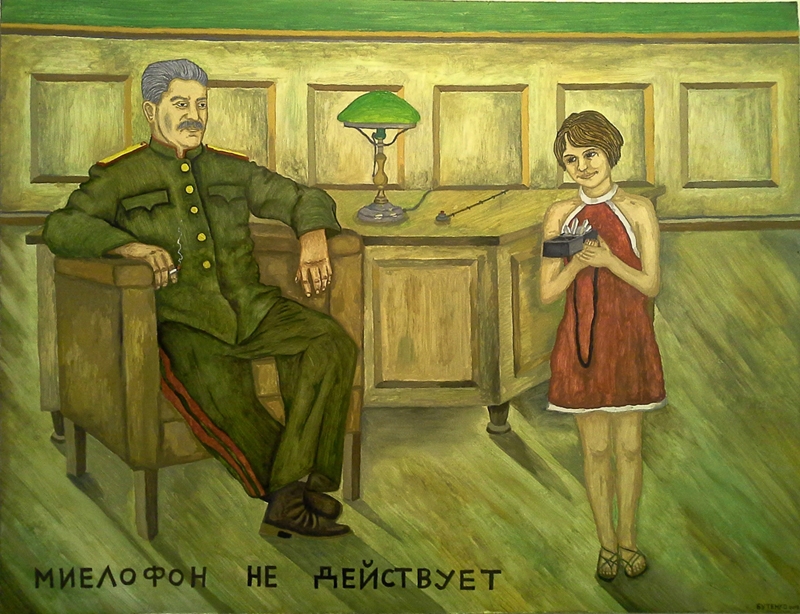