Nestor Engelke “Garden of the Academy of Arts named after E”

A retrospective utopian exhibition, virtual capture and almost ritual appropriation of public space, as well as an ironic rethinking of one’s own myth-making.

Nestor Engelke (aka Professor Woodmann, a member of the Free Lumberjacks and one of the founders of the Sever-7 group) is a hereditary architect and artist, a representative of a dynasty of cultural figures inextricably linked with the St. Petersburg Academy of Arts. He not only studied and taught at “Hogwats” (as the AH is affectionately called SPBGAIZhS named after Repin), but he grew up and lives opposite the main building – in a house with a portico behind a “secret, elegant and truly” classical “garden, where priests of art to walk and create “(V. Buzinov” Ten walks along Vasilievsky “). At the end of the 18th century, on the site of a house in the Academic Garden, where the Engelke family lived for half a century, there were several wooden houses …

It is in this place that the artist himself and his virtual-real “ghosts” of the past from the exhibition “Paradise That I Built” in the Anna Nova gallery meet the viewer. Turning around, we see the transformation of the very garden, behind which we can see the abandoned or unfinished building of the Academy of Arts. Now this space has been redesigned and filled with wooden pavilions in a sense inheriting the tradition of the Venice Biennale in the Giardini Gardens, where Nestor Engelke collects architectural and artistic projects that are significant for his career.

Notre Dame de Kunsthalle first shown at the DA! MOSCOW art show in Gostiny Dvor, and then reconstructed on the lawn near the Nerl at the River of Peace festival in Suzdal. The entrance part is decorated with the “spirits of the forest”, the artist’s original self-portraits, and the central part is filled with homages to “Danae” by Rembrandt, “Portrait of Pope Innocent X” by Velasquez (and Bacon at the same time), “Self-portrait” by Rubens.

The house with columns is an as yet unrealized project “Tomb of Pinocchio” or “Pantheon for a tree”. An allusion to a personal crypt and the need to defend even after death from a hostile outside world, which is manifested in the scene of a “clumsy meeting” at the entrance to the building.

In the central part of the park, in place of a granite column crowned with a lyre, a tower of skulls has grown. On the one hand, it visually refers to the “Endless Column” of Brankuzi, on the other hand, to the “Apotheosis of War” by Vereshchagin and the “Chele-Kula” Serbian tower of skulls, and on the third, it is an image of the genealogical tree.

Next to it there is a recreation center “Garage”, which was shown in the framework of the exhibition “Nemoskva is not far off” on the second floor of the Central Exhibition Hall “Manezh”. The central part is occupied by a map of Russia, carved out of the world map in a separate piece, on the sides – self-portraits of Nestor in the image of a deer and “spirits of the forest”.

The pavilion for clumsy reading, assembled specifically for the exhibition at the Ovcharenko Gallery, is a portrait gallery of Russian writers. A literary study filled with the faces of our classics, familiar to the viewer since school – Pushkin, Nekrasov, Gogol, Tolstoy, etc.

A difficult and ambiguous path leads the viewer to the backyard of the Academy of Arts: either a destroyed or an unfinished monument of traditional classical art education, gaping with its empty eye sockets at the races of free horses and a Trojan horse peacefully standing on this mortal land. The atmosphere of this brutal and fragile proto-world “E” is filled with the sounds of baroque music (the name of the track “Princess” is also not accidental – that is the name of his dog), whipping up the already played imagination in the spirit of the films “Shining” and “The Wall”.

Biography: Born in 1983 in St. Petersburg. Hereditary architect, representative of the academic family of architects, artists and art historians. Nestor received a classical St. Petersburg art education, then taught architectural design at the Institute named after I.E. Repin. Inventor of the author’s wood-painting technique, member and co-founder of the “North-7” group. Lives and works in St. Petersburg.

«Garden of the Academy of Arts named after E» Nestor Engelke 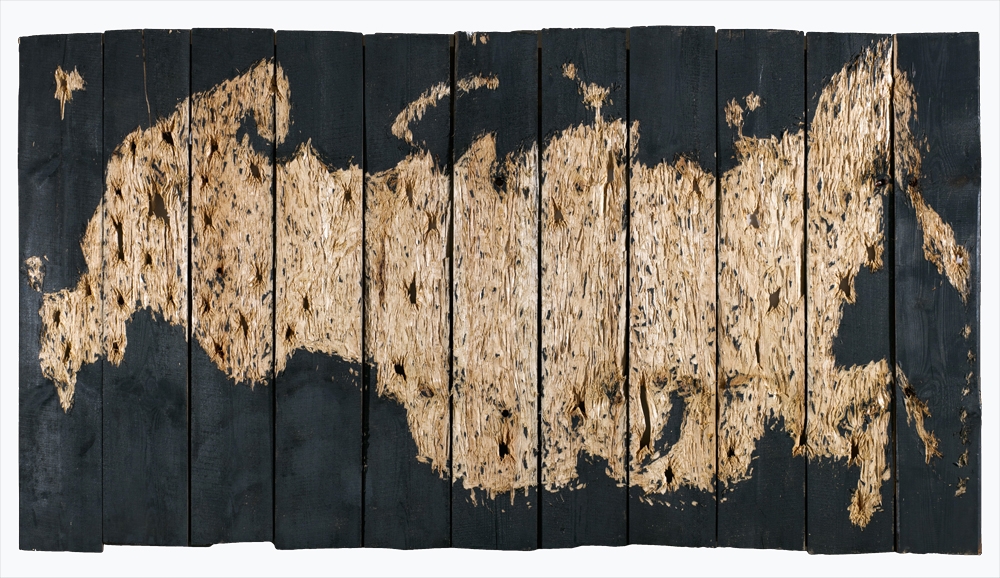 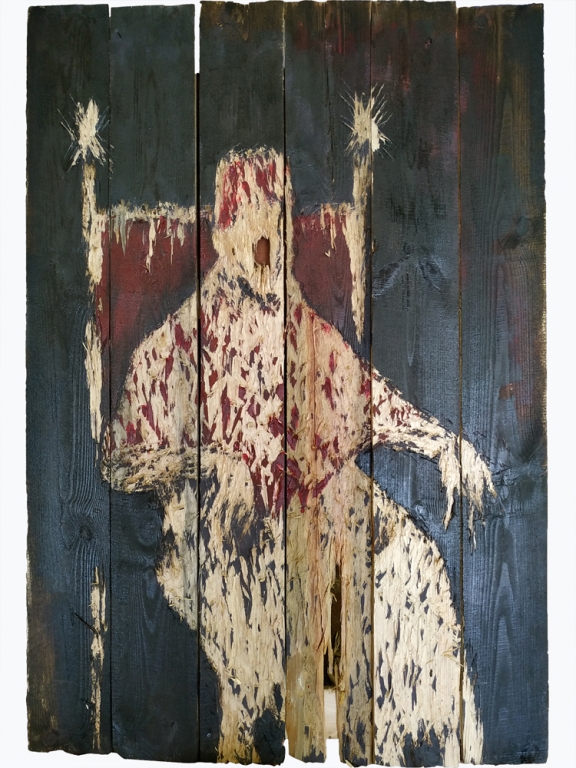 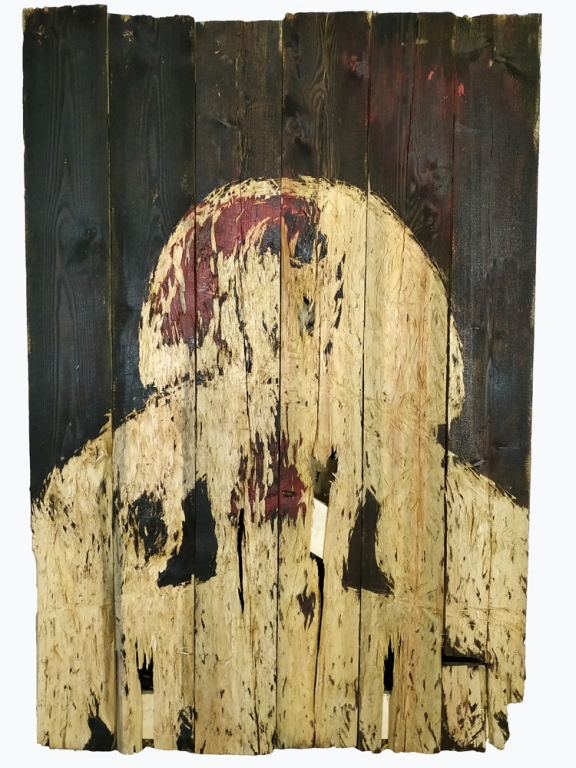 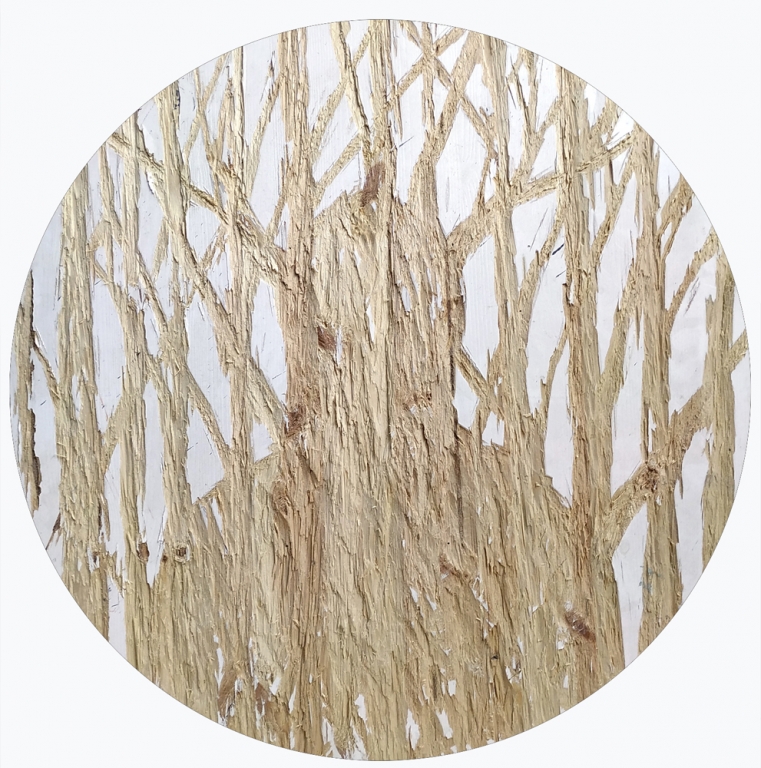 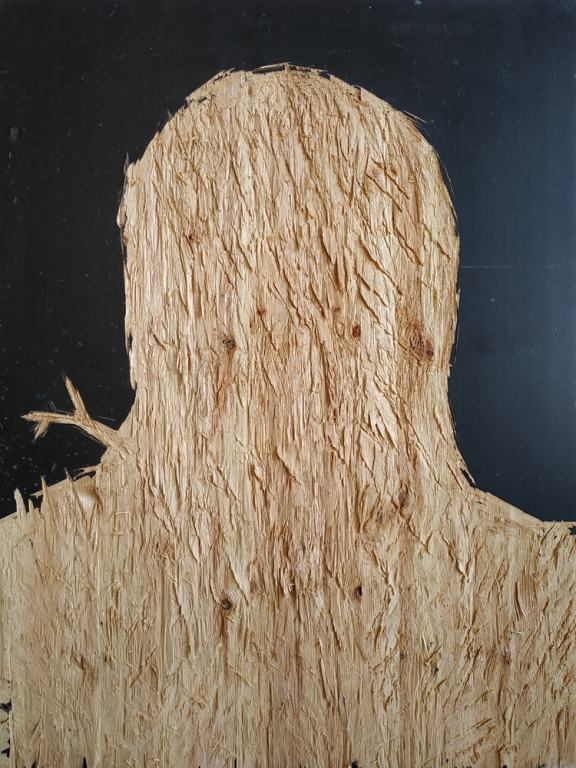 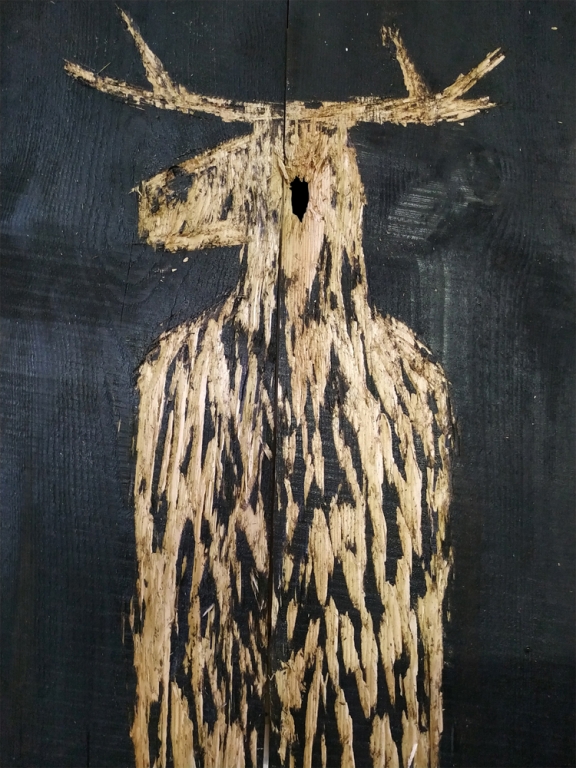 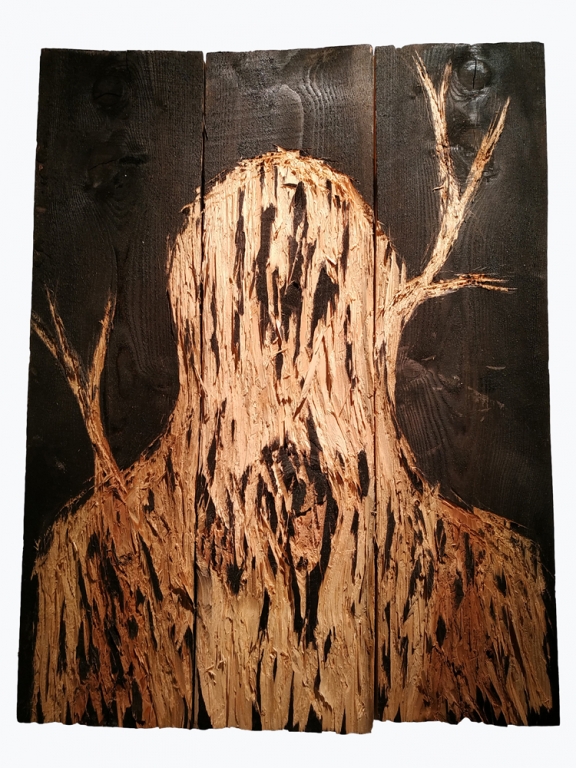 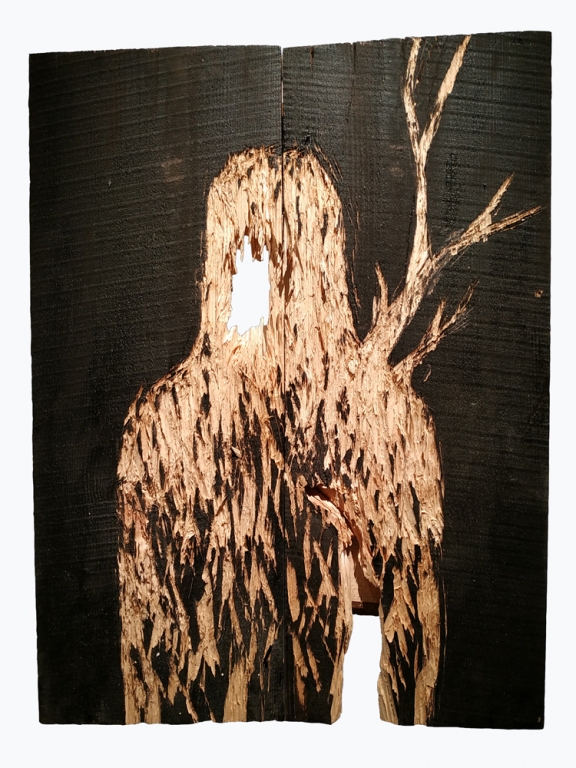 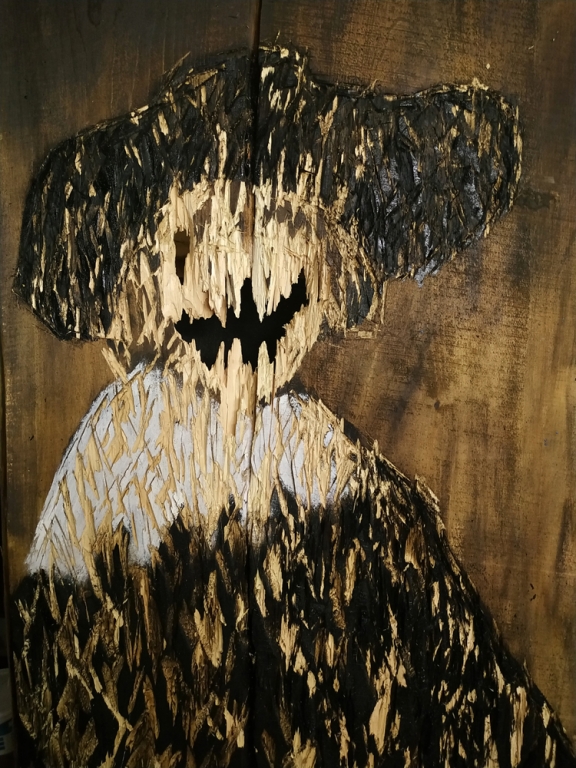 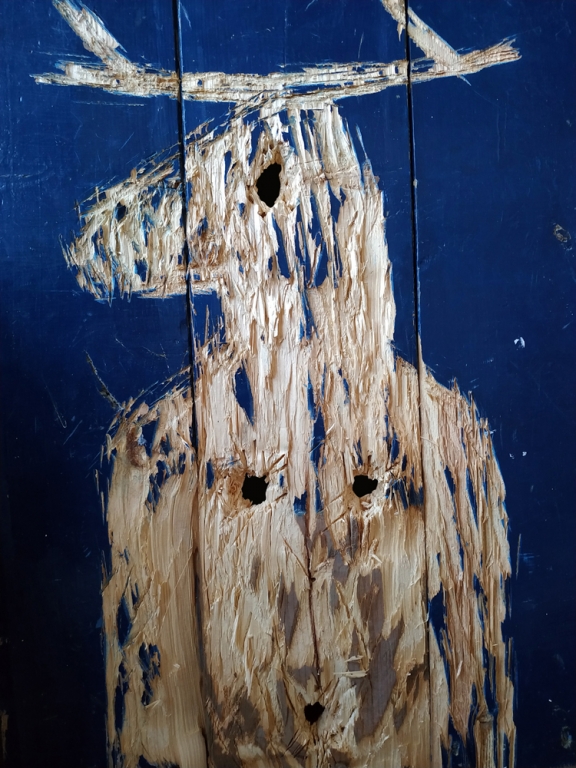 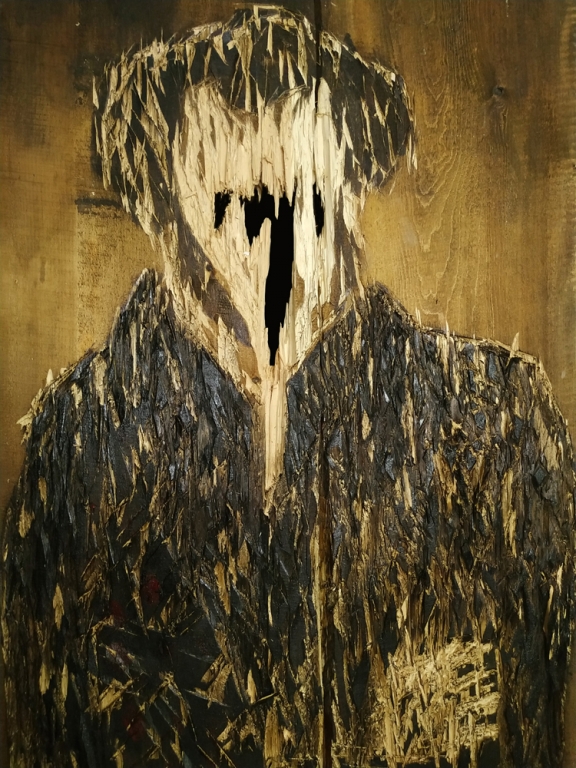 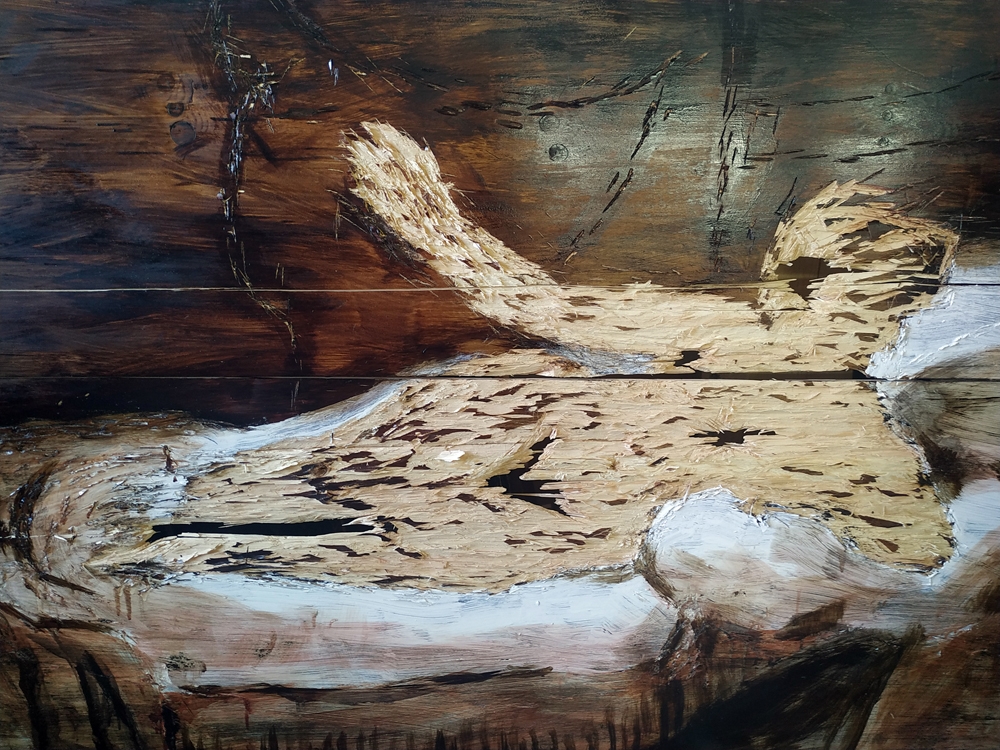 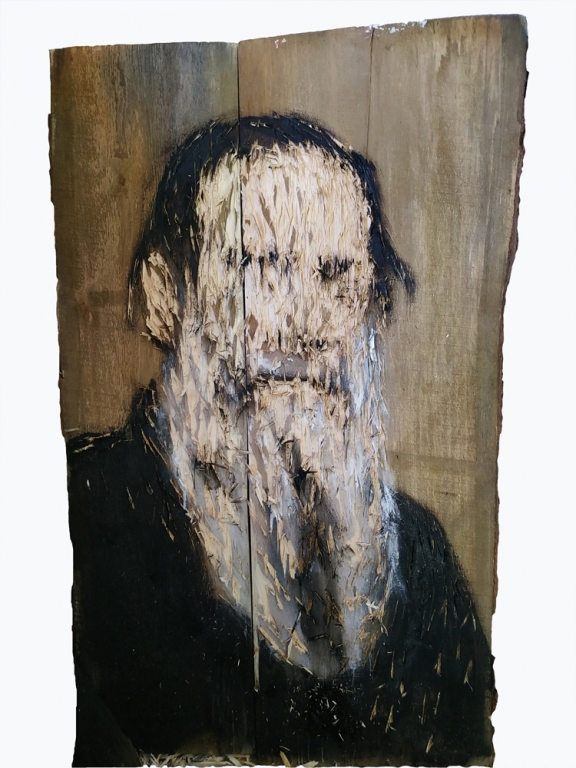 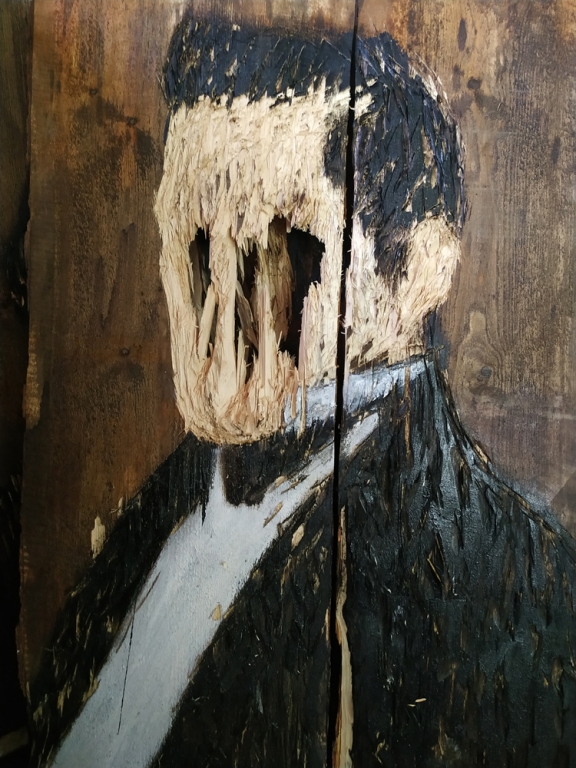 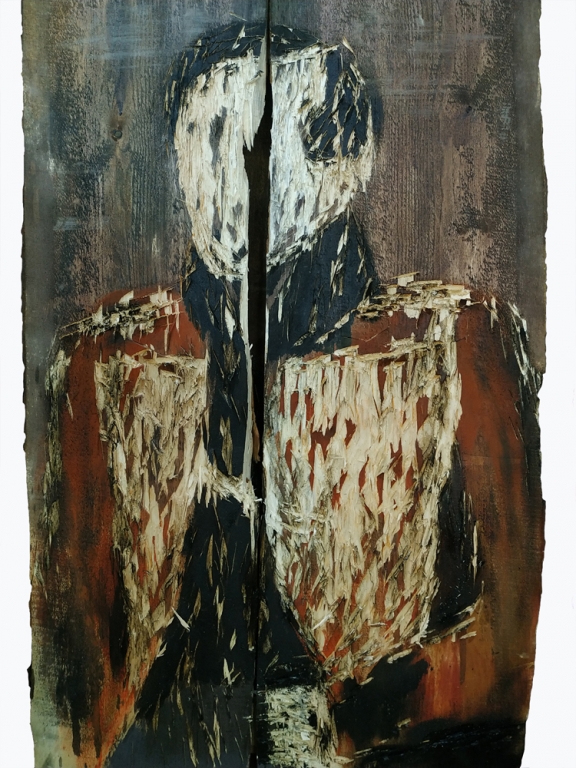 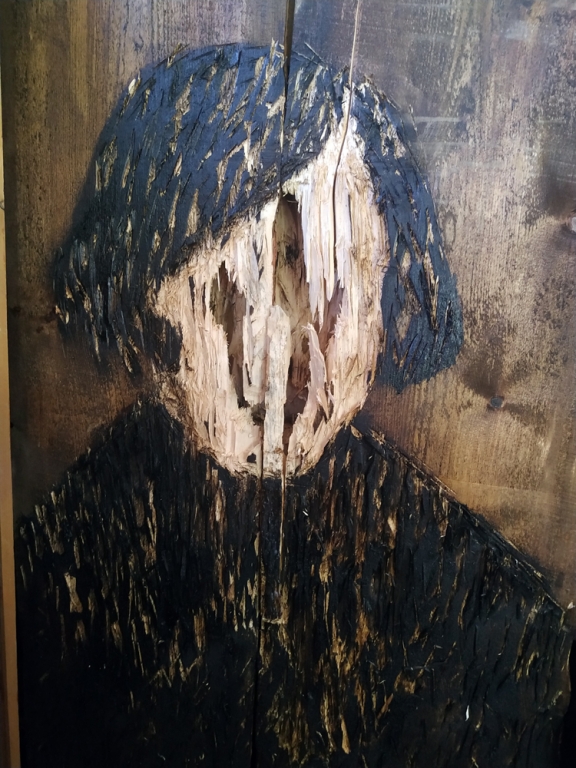 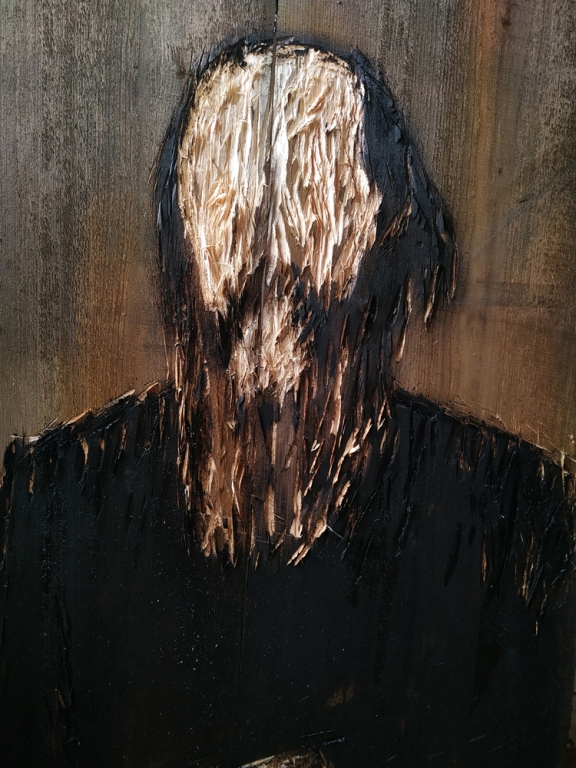 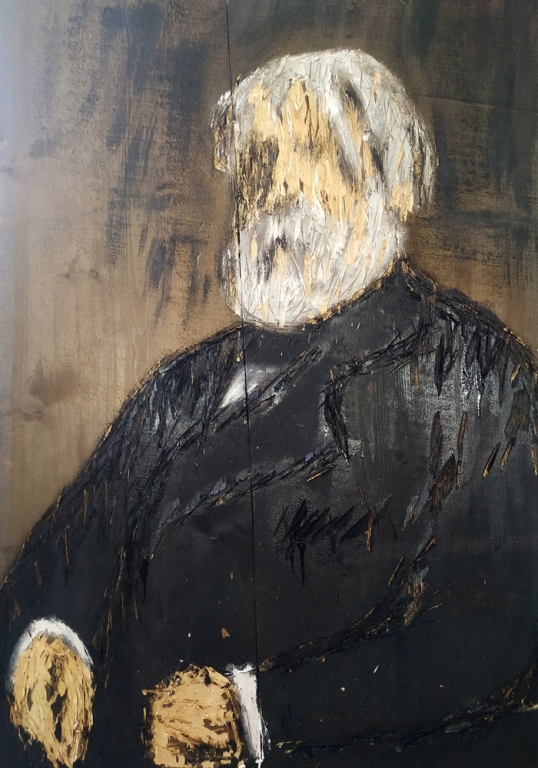 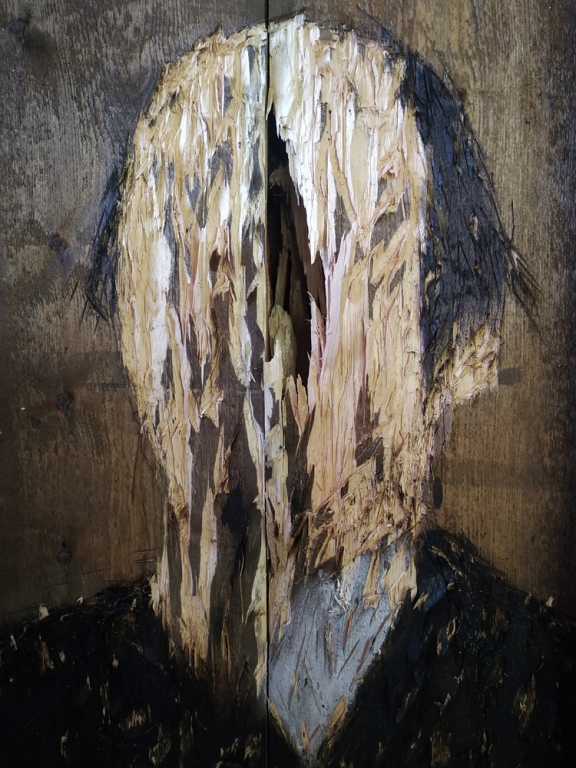 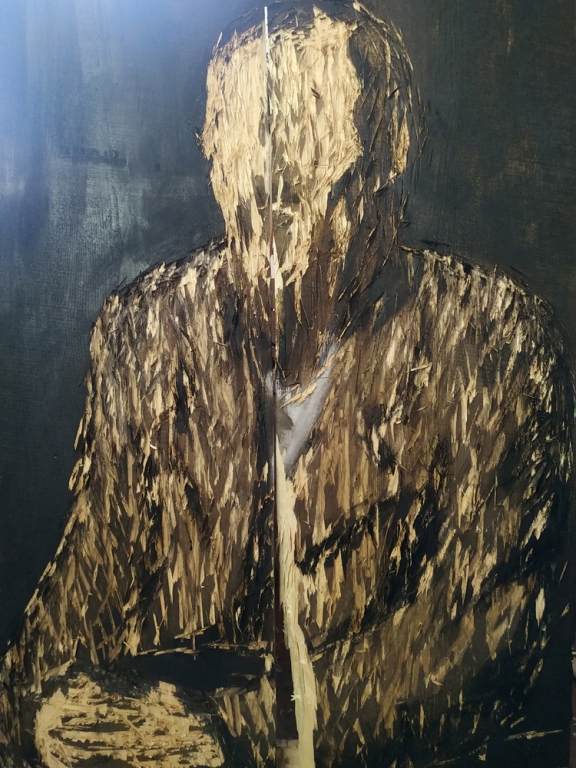 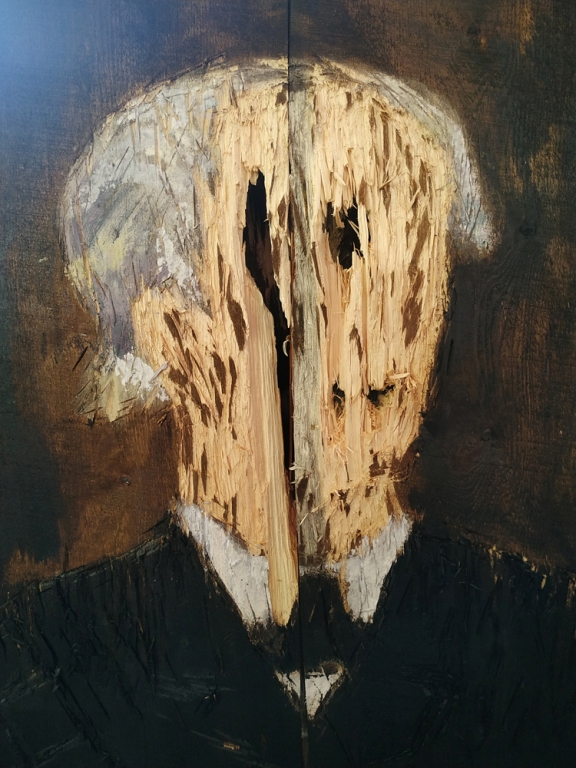 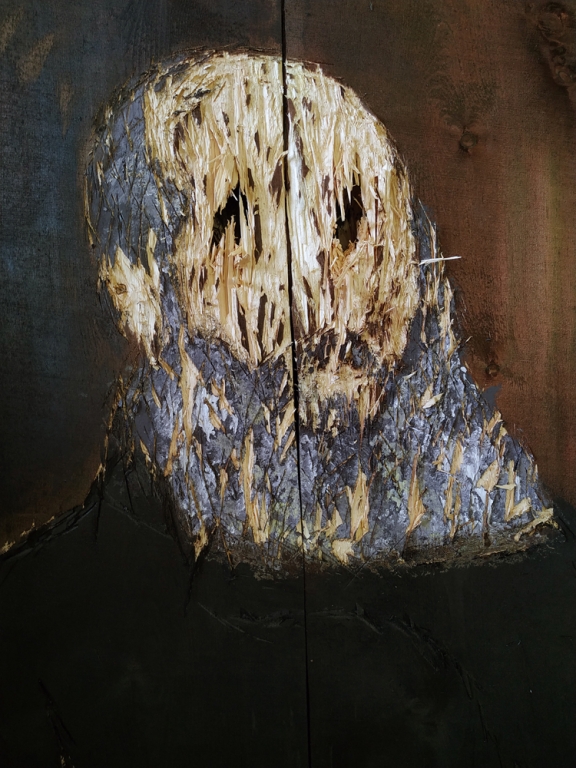 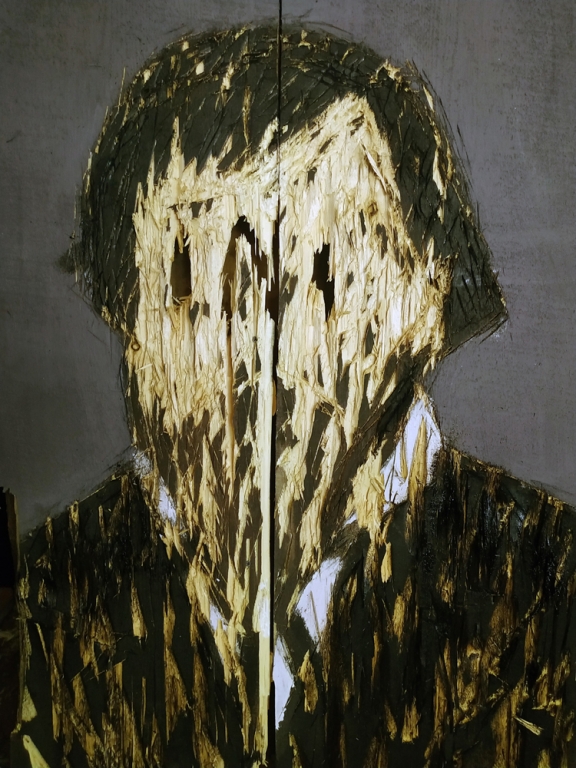 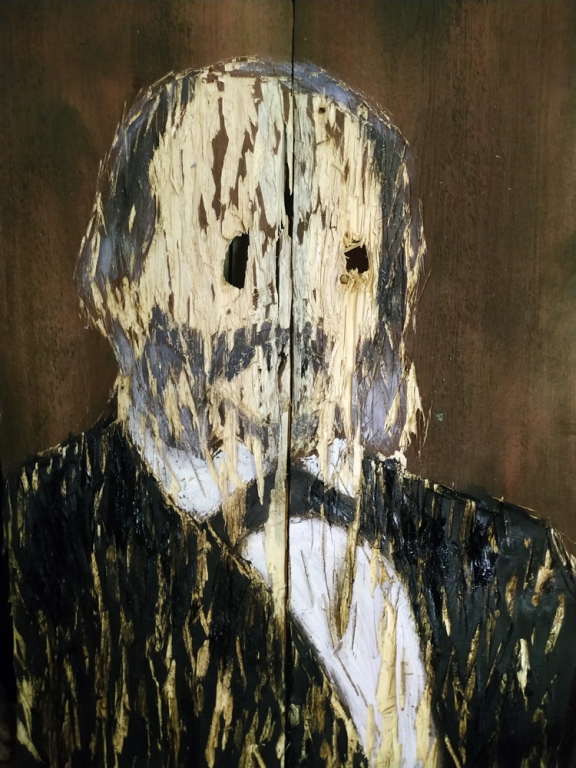 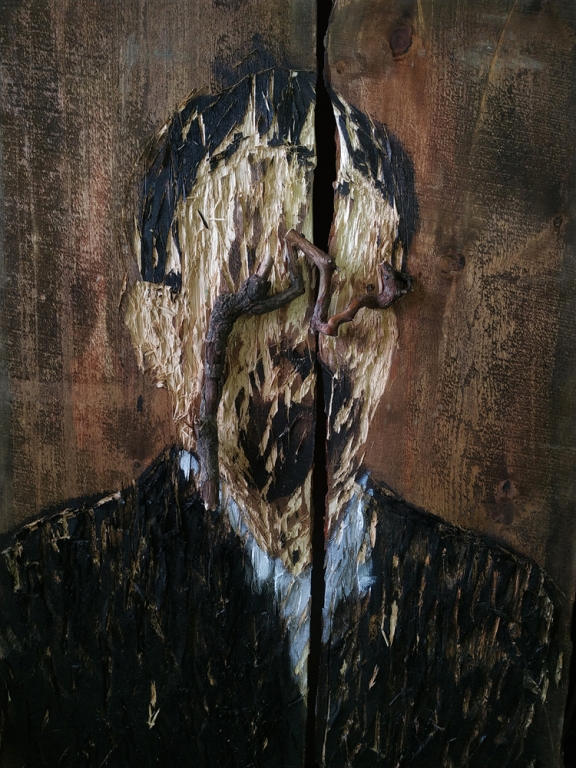 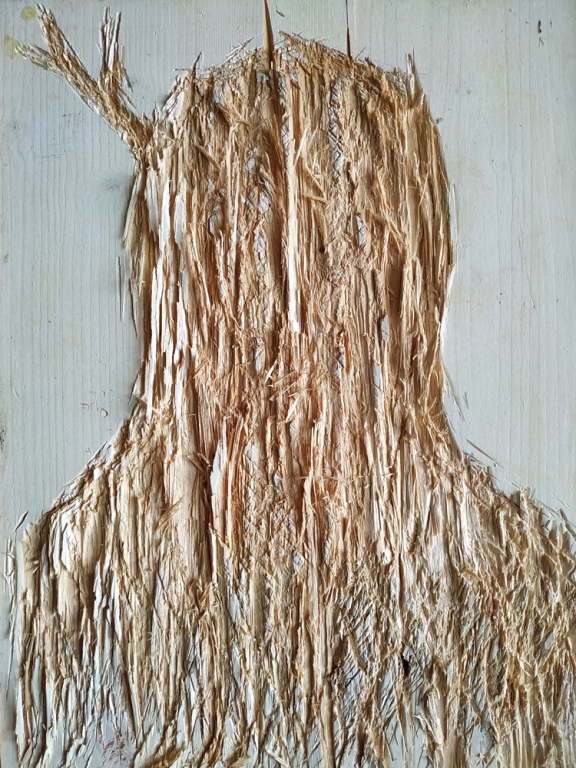